“Commentaries On the Times Radio” with Playthell Benjamin

In Conversation with Dr. Gerald Horne John J. and Rebecca Moores Chair of History and African American Studies at the University of Houston

Gerald Horne is an African American historian who currently holds the John J. and Rebecca Moores Chair of History and African American Studies at the University of Houston. He received his PhD from Columbia University and a J.D. from theUniversity of California, Berkeley. He is a frequent contributor to Political Affairs magazine.

He is a prolific author, Horne has published on W. E. B. Du Bois and has written books on a wide range of neglected but by no means marginal or minor episodes of world history. He specializes in illuminating previously obscure or misrepresented struggles of humanity for social justice, in particular communist struggles and struggles against imperialism, colonialism, fascism and racism. Individuals whose lives his work has highlighted in their historical contexts have included the blacklisted Hollywood screenwriter John Howard Lawson, Ferdinand Smith (Jamaican-born communist, sailor, labor leader), the perplexing Lawrence Dennis, an African-American fascist and racist who passed for white, and the feminist, anti-colonialist, internationalist intellectual Shirley Graham DuBois whose own career was overshadowed by that of her famous husband. While many of Horne’s books use a celebrated, intriguing or politically engaged individual as a prism to inspect the historical forces of their times, Horne has also produced broad canvas chronicles of infrequently examined periods and aspects of the history of white supremacy and imperialism such as the post-civil war involvement of the US ruling class—newly dispossessed of human chattels—with slavery in Brazil, which was not legally abolished until 1888, or the attempts by Japanese imperialists in the mid-20th century to appear as the leaders of a global war against white supremacy, thus allies and instruments of liberation for people of color oppressed by Anglo-American Empire.

Manning Marable said, “Gerald Horne is one of the most gifted and insightful historians on racial matters of his generation.”

TruthWorks welcomes Playthell Benjamin with “Commentaries On the Times Radio” to our exciting Black Voice Collaborative line up.

This weekly program features the best of the writings of Playthell Benjamin with commentary from his renowned virtual magazine, “Commentaries On the Times”http://commentariesonthetimes.wordpress.com/.

The program will broadcast Thursday, 10 pm ET. “Commentaries On the Times“, a compilation of many years of essays, commentary and analysis of world and domestic issues. They include commentary with carefully researched historical background of the issues of day, including Black history, art, music and current events and people.

Benjamin brings a scope of 40 years of outstanding journalism and broadcasting to TruthWorks. As a former pioneer in the development of Black Studies programs and pundit broadcasting, he comes to a microphone with tremendous knowledge, insight and passion. Of his products, he labels his wordsmith products as, “Praising Saints, Celebrating Heroes, Unmasking Charlatans, Defending the Defenseless and Chastising Scoundrels”. We expect that his show will be no less.

With a lively wit to compliment a broadly learned mind, Playthell is a great guest on television or radio and has shared the mike with some of the biggest host in television, including Geraldo Rivera and Bill Mahr, which can be soon viewed on You Tube. At Present he is completing two books :Quantum shift: Commentaries on the Obama Phenomenon and Jazz at Lincoln Center: Magic Moments In the House Of Swing, a collaboration with the renowned photographer Frank Stewart. Playthell has held a professorship in History/Afro-American Studies at the University of Massachusetts and recently held an adjunct professorship in journalism at Long Island University.

His essays on music criticism have appeared in a wide variety of publications and his interest range from classical music to Jazz to Latin and Hip hop. He writes program notes for Jazz at Lincoln center concerts and is an accomplished Latin percussionist who can be viewed playing with the group Zon Del Barrio on You Tube.

A regular reader of ”Commentaries On the Times” recently commented on one of his essays, “READ the top notch researched work that Brother Playthell George Benjamin is providing for Us. It doesn’t get any better and knowledge is a beautiful thing to share with your family and friends! Several hundred articles await your READING COMPREHENSION and you get what I consider a full PHD worth of knowledge nuggets. Go get that information and become the intelligent person you’ve always wanted to be amongst your crew of friends. Speak with intelligence and knowledge to support your points of view. In spoken and written dialogue, The FACTS tell who you are and as my grandmother used to say, “All Things in Life Change, but Not The TRUTH!” Let’s tell Our Story! I salute YOU Brother Playthell George Benjamin for “Enlightening Us All With Your Knowledge” in so many fields of Interest”. 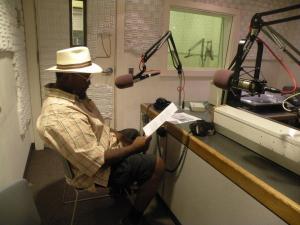 Playthell George Benjamin is the producer of “Commentaries On the Times”, which he writes and delivers on WBAI radio in New York City, and a producer with The Midnight Ravers, a long running show exploring the world of art and politics which has won several radio awards for excellence in programming. He is an award winning journalist who has been nominated for the Pulitzer Prize in two different categories: Explanatory Journalism, Village Voice 1988, and Distinguished Commentary, New York Daily News1995. As part of the production team for The Midnight Ravers, Mr. Benjamin won a 2011 award for excellence in radio programming, given for The Curtis Mayfield Special.

Playthell has won several prizes ranging from The Unity Award presented by the School of communications at Lincoln University in Missouri for distinguished commentary on race relations; the Griot Prize for excellence in covering a story requiring an exploration of African American history and culture: “Who is Listening to LouisFarrakhan?” It was awarded by the New York chapter of the Association of Black Journalist in December 1989. In 1991 Mr. Benjamin won the NYABJ Magazine Awards for Feature Stories,and in 1996 he won the first Annual Tom Forcade Award “for honesty and accuracy in drug reporting” awarded by High Times magazine for his columns on drug use and abuse in the New York Daily News.

His book, “Witnessing the Motion of History” is expected to publish in the Summer of 2013. His e-magazine covering analysis, commentary and presentation of issues and events is available here: http://commentariesonthetimes.wordpress.com/

On Christopher Doner, the former LAPD officer, he recently wrote,

A REAL LIFE DJANGO? As I write a black gunman is terrorizing the Los Angeles Police Department, wreaking murder and mayhem upon the cops and their loved ones. Judging from comments online a growing number of people are beginning to see him as a real life Django Unchained! The broadcast media has been treating him like the crazy white boys who are going off all over the place – the macho paranoids like Dirty Dick Popolovsky in Pittsburgh, or pootbutt nerds suffering from pant worm and need a gun to feel like a man. But Christopher Dosner is neither one. When I saw his military record and the fact that he was once a member of the LAPD, I decided to do some investigation, beginning with reading his “Manifesto,” then reading a variety of materials on him. It was a revelation. I think it is a representative anecdote on the state of racism, corruption and brutality in contemporary police community relations in the great American cities. Here is my take on the man and what motivated his murderous mission. See: More Dangerous than Django! And he’s All the Way Live!!!!

As a former pioneer in the development of Black Studies programs and pundit broadcasting, he comes to a microphone with tremendous knowledge, insight and passion. Of his essays and commentaries, he labels these tremendously illuminating wordsmith products as, –

“Praising Saints, Celebrating Heroes, Unmasking Charlatans, Defending the Defenseless and Chastising Scoundrels”.
. . . Commentaries on the Times Radio will be no less.

TruthWorks Network The Black Voice Collaborative Live and Call-In Talk Radio Talk radio engaging in discussions and providing informed knowledge of contemporary world political events and issues. Presentation of ideas, research and scholarship as a basis of analysis. Informed dialogue, hosted by knowledgeable and experienced voices. This is serious talk radio, focusing on TALK THAT MATTERS. The Black Voice Collaborative on Blog Talk Radio. Presenting some of the best more concise voices which examine, analyze and explore issues about and for the Black community. From insightful and in-depth with scholars and activist to authentic discussion about Black families, relationships and children, to “just damn push-back political smackdown” . . . Discover YourSelf on Truthworks Network. Truth Works Network A broadcast product of OUR COMMON GROUND COMMUNICATIONS LLC
View all posts by TruthWorks Network »