“If America Fails?: The Coming Tyranny”

If America Fails?: The Coming Tyranny

Jared Yates Sexton is a political analyst and author whose work has appeared in The New York Times, The New Republic, Politico, Salon, The Daily Beast, and elsewhere. He is the author of The People Are Going To Rise Like The Waters Upon Your Shore: A Story of American Rage; The Man They Wanted Me To Be: Toxic Masculinity and a Crisis of Our Own Making; and American Rule: How A Nation Conquered The World But Failed Its People. He is the co-host of The Muckrake Podcast and serves as an associate professor of creative writing at Georgia Southern University.

Examining the dystopian story of “The Handsmaid’s Tale” through a new set of lenses- the potential of the U.S. of A. as a failed state. Full authoritarianism, religious extremism, and/or other fascist dictatorial strategies. A 12-week webcast series that examines “The Handmaid’s Tale” (Hulu series) – the fictional story that explores the real potential of the U.S. as a failed state, through the lens and perspectives of the current American political landscape. Co-hosts Janice Graham and L. Michelle Odom It happens with the eroding of the right to protest in freedom, and with uneven distribution of consequences from law enforcement. It happens when people we think are on our side when it comes to social justice, don’t show up for us, or worse, shame us for taking direct action. It happens when we all look at each other and say “this can’t last, right?” hoping that it’ll go away on its own while the fascists build militias. Visit our webcast web page that contains in-depth information and important commentary on these issues. http://www.ifamericafails.live

Lessons from
The Handmaid’s Tale

Examining “The Handmaid’s Tale”. . .the fictional story that explores the real potential of the U.S. as a failed state. Discussion of “The Handmaid’s Tale” (HULU series) through the lens and perspectives of the Black experience. How do the events and characters suggest what might happen to Black people if the U.S. were to devolve into civil war? What do you see as the potential and capacity of the U.S. as a failed state? What might fascism mean for Black people? We will explore these questions and much more. Add your voice to the conversation! #FightFascismNow 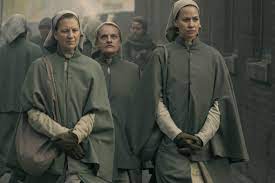 Can It Happens Here ?

When written, nothing included in the story, The Handmaid’s Tale, had NOT already happened in human history. The best-selling novel by Margaret Atwood is set in Gilead, a totalitarian society in what used to be part of the United States. Gilead is ruled by a fundamentalist regime that treats people, other than white men, as property of the state, and takes place following some environmental disasters that cause a plummeting birth rate. The new regime forces the U.S. system of democracy into failure, and ensuing chaos and civil war. The areas where the “Gilead Republic governs” in previous American regions, establishes a strict caste system and penal system.